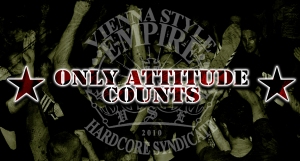 THE ANNIVERSARY RECORD IS IN WORKS !!!

Biografie
O.A.C. – The History, the Message

This band started out in 1993 with the intention to spread their music and message worldwide all over the planet. Through their hard working ethic and their never-ending determination O.A.C gained more and more respect and became an institution in the international Hardcore/Metal/Punkrock scene

From the very first Demo „Another Victim“(1993) to their latest release „Return the favour“ (2006) they never stopped believin‘ in the true meaning of Hardcore.

A lifestyle, not only a certain kind of music, that would bring a big variety of people from most different places and environments all over the world together, to co-exist and co-operate on a positive and productive way. With respect for each other as a strong fundament and the will to change things for the better as their main goal. ALWAYS REPRESTIN’ HARDCORE and always standing up for their beliefs !!!

Over the years this band has played so many shows in almost every country of Europe, has put out so many records (4 albums, 4 EPs and countless sampler contributions) that their FRESHNESS and POWER after 14 years in the HARDCORE BUSINESS has to be admired.

„We’re really kinda proud to say that we’re still in this because we believe in what we do.There might have been good and bad times, people came and left but this band always consisted out of members who had a strong love for the Hardcore movement and that’s what kept us alive.“ ,says Mike C. (founder and singer of O.A.C)

And he adds: „We..re getting older each day but in our hearts we’re still the same kids that started back in 93. Sure – the years and expierences made us wiser but we’re still hungry for more.We still wanna put out good albums and play great shows. We wanna give the people back what they have given to us.“

Return the Favour, one could say